Brown, who started 2013 ranked 86 in the PDC Order of Merit, is to be sponsored by ‘The Wizard’ with immediate effect.

The youngster has shown flashes of his ability since winning a tour card at the 2012 Qualifying School, winning a Youth Tour event and, perhaps more impressively, reaching the semi-finals of a Pro Tour event in the last twelve months.

Whitlock, the world number five, believes that Brown has the potential to become one of the sport’s top players in years to come.

“I am delighted to be in a position to sponsor such a promising young player,” said Whitlock, the reigning European Champion.

“Keegan has huge potential and is a great lad. He was the perfect fit for what I wanted to do.

“I know how important sponsorship is for a dart player so I wanted to help out and make sure Keegan is given every chance to achieve what I know he is capable of.

“I hope that my experience can help him become a full professional and go on to fulfil his ambitions in darts.”

Brown became the youngest ever male to play county darts when he made his debut for the Isle of Wight back in 2006.

He went on to play on the BDO circuit, qualifying for the Winmau World Masters, before going on to progress from Q-School comfortably. Michael van Gerwen completed a brilliant double by winning both of the first two Speedy Services UK Open qualifiers in Crawley at the weekend.

“This feels amazing,” said van Gerwen, who grabbed the £6,000 first prize on both days.

“Not many people have won two of these in the same weekend so I am proud of myself for achieving that.

“It was very tough but I played well on both days. My form is good and I want to keep it going.”

There was also success for reigning UK Open champion Robert Thornton, who hit a nine-dart-finish in his quarter-final defeat to Chisnall on Saturday.

Raymond van Barneveld reached Sunday’s semis but was beaten by Dolan, after ‘Barney’ had ended Simon Whitlock’s run to the last eight.

The draw for the first European Tour event of 2013 was also made at the weekend following the qualifier, which took place on Friday evening at the K2 Centre.

John Henderson’s reward for progressing through that qualifier was a first round clash against fellow Scotsman Thornton at the inaugural UK Masters.

Arron Monk, who also won through Friday’s qualifier, will face Ian White at the Minehead event in March.

van Gerwen will play Jelle Klaasen, van Barneveld is up against Tomas Seyler and James Hubbard will face Nigel Heydon. ‘The Machine’ and ‘Mighty Mike’ both recorded averages of over 100 in their respective triumphs over Adrian Lewis and Raymond van Barneveld, while ‘The Thorn’ won the last three legs to claim a draw against Wes Newton – a sequence of results that saw the trio all reach four points after three weeks of action.

Wade admitted that his 7-4 success against Lewis was his best performance for some time, despite his run to the semi-finals of the World Championships.

He said: “I’m pleased to have finally played like this. I felt it was coming because I have been doing it in practise but frustratingly not on the stage.

“I made it easy for myself against Adrian and it felt really good.

“I’ve been putting the hard work and effort in for the last few months and it is starting to show.”

van Gerwen averaged 104 as he claimed his first win in the tournament with a rampant 7-3 defeat of van Barneveld, who had beaten him in the final of the Grand Slam of Darts in November.

“This was a special win for me,” said van Gerwen, who has also made an unbeaten start to his debut season.

“It is a little bit of payback for the Grand Slam but the important thing is that I showed that I am still in form and that I can keep it going.

“To beat Raymond van Barneveld on a Premier League stage is something special, especially with an average like that.

“I have made a great start and now it’s up to me to keep it up.”

Thornton hit back from 6-3 down to earn a draw against Newton but there was disappointment for Simon Whitlock, who lost out to Phil Taylor despite averaging over 100.

Andy Hamilton saw off Gary Anderson in the evening’s over match.

Raymond van Barneveld continued his impressive start in the McCoy’s Premier League with victory over Wes Newton in Aberdeen, while Michael van Gerwen and Robert Thornton played out an exciting draw to remain unbeaten after the first two weeks.

‘Barney’ averaged over 100 for the second consecutive week as he cruised to a 7-2 victory over Wes Newton.

van Gerwen and Thornton grabbed a point each in a high quality affair, which saw all twelve legs go with the throw.

There was disappointment for James Wade and Simon Whitlock however, as they lost out to Andy Hamilton and Gary Anderson respectively.

Week three sees the tournament reach Bournemouth, where van Gerwen and van Barneveld will do battle next Thursday.

Wade is up against Lewis.

See some of the stars of Premier League Darts at THE BENFIELD NISSAN MASTERS, Sunderland – Tickets from £20

0
By Modus Posted on February 8, 2013 in Uncategorized James Wade, Simon Whitlock and Raymond van Barneveld all got off to winning starts in the McCoy’s Premier League, while Robert Thornton and Michael van Gerwen both made impressive debuts at Belfast’s Odyssey Arena on Thursday evening.

Wade made Wes Newton pay for missed doubles as ‘The Machine’ took a commanding 7-4 triumph.

van Barneveld posted the night’s highest average (102.02) in his 7-4 success over Gary Anderson.

van Gerwen looked like he might add his name to the winners list when he led Phil Taylor 6-4 but ‘The Power’ fought back to grab a draw.

Full reports available on the players’ official websites (click on names to be redirected).

0
By Modus Posted on February 5, 2013 in Darts Events, Uncategorized

England retained their title by defeating Belgium in the final of the World Cup of Darts in Hamburg on Sunday.

Phil Taylor and Adrian Lewis saw off Belgian brothers Kim and Ronny Huybrechts to win the exciting tournament in Germany.

Webster, who was partnered by Richie Burnett, has reached at least the last four stage in all three stagings of the PDC tournament.

And Wales almost prevented tournament favourites England from recapturing their crown but were denied a place in the final after surrendering a 3-1 lead in the pairs decider.

“It was gutting to go out when we needed just one leg from three,” said Webster, who is hoping to build on his encouraging form.

“England showed their class in the end and we’re not too downbeat on reflection.

“I thoroughly enjoyed the tournament and played well in patches. I’m looking forward to the rest of the year now.

“It was great to have Richie in my corner again. Full credit to Phil and Adrian and roll on the rest of 2013.”

See some of the world’s top darts stars in the Benfield Nissan Masters, Sunderland – Tickets on sale now.

0
By Modus Posted on February 3, 2013 in Uncategorized

Mark Webster led Wales into the semi-finals of the World Cup of Darts in Hamburg as he and Richie Burnett claimed a hard fought victory against Spain.

Webster produced finishes of 102, 94 and 76 in a 4-3 defeat of Antonio Alcinas but Burnett suffered a loss by the same score-line against Carlos Rodriguez.

The pair then sealed a 4-2 success in their doubles match to set up a semi-final clash against tournament favourites England.

“We’re relieved to get through,” admitted Webster, after sealing a place in the last four for a third consecutive time.

“It was a bit of a scrappy tie but we got the job done and that’s all that matters.

“Yesterday it was a bit like this in the afternoon but we kicked on in the evening so hopefully that’ll be the same tonight.”

Webster grabbed a break of throw in the opening leg of his singles game, hitting double top after 14 darts.

Alcinas responded by hitting the first maximum of the match as he broke back immediately.

He then edged ahead with a fine bull finish but Webster hit back with a brilliant checkout of 102.

The Spaniard pegged double twelve to move within a leg of victory before ‘Spider’ forced a deciding leg with a clinical finish of 94.

And the left hander stepped in to seal the win with another tidy finish, this time taking out 76 after Alcinas missed four match darts.

Burnett produced a sensational 156 finish in his singles match but was edged out 4-3 by Rodriguez, leaving the result to be settled in the pairs.

Spain moved in front when Rodriguez took out 96 but Burnett levelled on double five.

Alcinas took out 70 as Spain wrestled back the lead but Wales restored parity once again when Webster followed a Burnett maximum by pinning double 14.

Webster pegged double ten for a timely break of throw before sealing the victory for Wales on double 16.

Team Wales will face the English pair of Phil Taylor and Adrian Lewis with a place in the final at stake.

Official Mark Webster Playing Shirts are available from our dartshop.tv

World Cup of Darts: Webster’s Wales Turn on the Style to reach Quarters 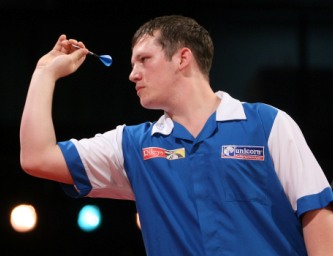 Wales produced a brilliant performance to book their place in the quarter-finals of the World Cup in a night of shocks in Hamburg, which saw some of the top seeds tumble out of the tournament.

Mark Webster and Richie Burnett did not miss a single attempt at a double and averaged over 98 in a 5-2 success over Canada, with Webster taking out a brilliant 120 finish along the way.

Webster said: “I think the 120 was massive because Canada started really well. That gave us a foothold in the game and we went on to put in a top performance.

“I’m pleased with how we played because we were not brilliant in the group games and it gives us both a lot of confidence for the rest of the tournament.”

Canada won the first leg before two 180s by Part put them in control of the second but Webster produced a fabulous 120 checkout to level.

Part took out 95 to edge the Canadians back in front after Smith had added a maximum of his own.

Wales squared up again before Webster took out 48 for a break of throw to give his side the lead for the first time.

Burnett then produced the same finish to take them within a leg of victory, which Webster sealed with the aid of a 180, hitting double 18 at the first attempt to maintain Wales’ perfect record.

Wales will face Spain in the last eight on Sunday afternoon.

Australia, Netherlands and Scotland were all amongst the seeded casualties on an unpredictable night of action.

Australia, Netherlands, Wales and Scotland all topped their respective groups as they moved into the last 16 of the World Cup of Darts in Hamburg with victories on Saturday afternoon.

Mark Webster helped Wales to victory over Italy and finishes of 119 and 80 from Robert Thornton aided Scotland in their defeat of Sweden.

Full match reports are available on the players websites (click players’ name to be redirected).

The quarter-final line-up  will be decided on Saturday evening, which sees Australia face Belgium and the Netherlands take on Finland.

Wales play Canada in the last 16, while Scotland are up against Spain.

Simon Whitlock and Paul Nicholson got off to a flying start at the World Cup of Darts in Hamburg as the Australian pair qualified for the last 16 after winning their first game, while Mark Webster, Robert Thornton and the Dutch duo of Michael van Gerwen and Raymond van Barneveld all enjoyed victories for their respective countries.  (more…)