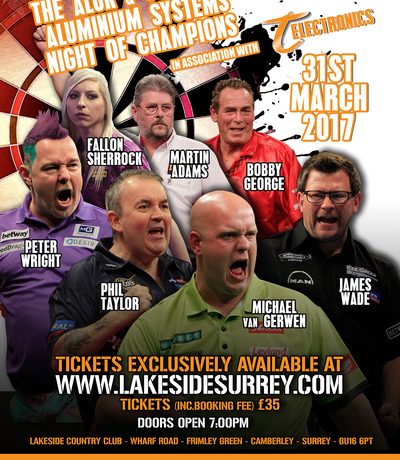 Limited tickets are still available to see Darts superstars Phil ‘The Power’ Taylor and Michael van Gerwen are part of an incredible line-up for March’s ALUK Night of Champions at the world famous Lakeside Country club later this month.

The pair, who are regarded by many as the greatest two players in the history of darts, will compete in an exclusive event alongside some of the sport’s other big names on March 31.

Dominant Dutchman van Gerwen is excited at the prospect of the event.

He said: “I’m really looking forward to this one. It’s a famous venue and we have some of the best players in the world, including the best – me!

“It will be a fantastic night for the crowd to see some of the top PDC players and some of their favourites like Martin Adams who is a big favourite there. I’m sure we will give them a great night of darts and I hope I will come out on top.”

Tickets for the ALUK Night of Champions in association with Telectronics are on sale via www.lakesidesurrey.co.uk and the remaining allocation is expected to be snapped up quickly.

Alternatively, tickets can be purchased via the box office at Lakeside by calling 01252 836464.