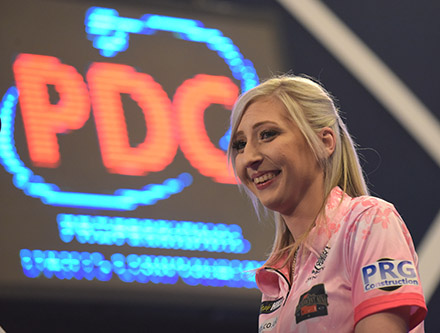 The former Lakeside Championship Women’s finalist produced a stunning performance to defeat Ted Evetts 3-2 and move into the second round.

“I can’t believe that I’ve made history,” said Sherrock, who had watched on as Mikuri Suzuki came close to winning her match against James Richardson on Sunday.

“I was inspired by Mikuru and I don’t think I would have believed in myself as much if she hadn’t performed so well.

“I’m absolutely over the moon – I have always dreamt of playing on that stage and winning on it is something I have dreamt of too but I never thought it would happen.

“I can’t remember much of the match but the atmosphere was amazing. I didn’t want it to end but I’m glad it ended the way it did with me making history.”

Sherrock sent he first warning signal by checking out 106 in the second leg of the match but went on to lose the first set 3-1.

A flurry of 180s – including two to kick-off one leg – helped her win the second set, but Evetts regained control by taking out 68 after she had missed four darts to take set three.

Sherrock clinched the fourth set 3-2 with a brilliant 13-darter under pressure before going on to seal glory by winning the deciding set 3-1.

The moment was greeted with enormous cheers and applause from a vocal Ally Pally crowd, with the historic sporting moment being shared widely around the world.