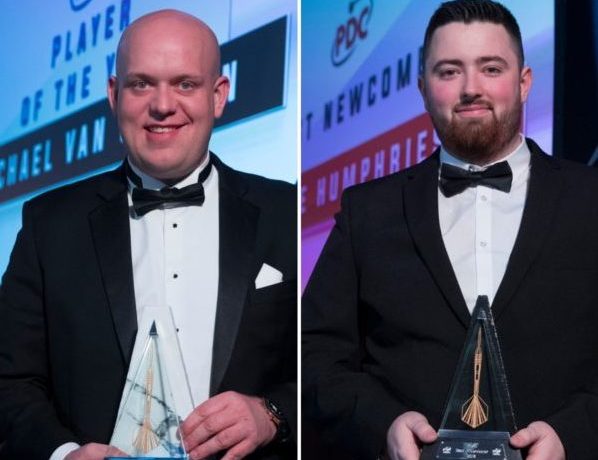 MICHAEL VAN GERWEN & LUKE HUMPHRIES were both honoured at the PDC Annual Awards Dinner at The Dorchester, London, on Monday evening.

Van Gerwen, who claimed his third World Championship glory after winning 19 titles in a superb 2018, picked up two awards including PDC Player of the Year.

The Dutchman also landed the award for ProTour Player of the Year, recognising his consistent success away from the TV cameras.

“To win these two awards is a phenomenal achievement, along with winning my third World Championship a few weeks ago,” said Van Gerwen, the world number one.

“Other players are getting better and better every week so I have to be at my best all the time. I love playing darts and I’m going to come back even stronger next year.

“Darts is growing bigger and bigger and is being watched by more and more people around the world, so it’s amazing to be World Champion and win this award as the sport continues to grow.”

Humphries, who sensationally knocked out defending World Champion Rob Cross in a run to the quarter-finals at Alexandra Palace, was awarded Best Newcomer.

2018 had also seen Humphries win the Development Tour Order of Merit for the second consecutive year.

He said: “This is a massive award and shows how far I have come over the last year,”

“To beat the reigning World Champion at Alexandra Palace was unreal for me and now my goal is to carry on my development and continue to make a name for myself.”