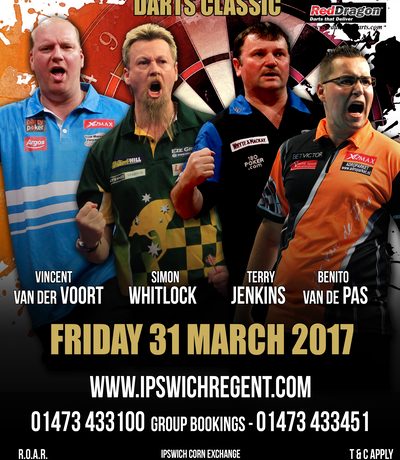 Four of the world’s top Darts stars will compete at Ipswich Corn Exchange in 2017 following the incredible popularity of previous arrows events at the venue.

Former European Champion Simon Whitlock will be on show, with Australia’s top player being joined by two Dutch stars and an English ace.

Rising star Benito van de Pas will be appearing in Ipswich for the first time along with ‘The Dutch Destroyer’ Vincent van der Voort.

Crowd-favourite Terry Jenkins completes the line-up, which is expected to cause another sell-out following suit with previous darts nights in Ipswich.

And former World Championship finalist Whitlock believes it will be fantastic evening of sporting entertainment.

“Everybody enjoys themselves at the darts,” said ‘Whitlock’, a former Premier League competitor.

“I don’t think there is another sport like it. It is pure and competitive but not tribal and it is all about the crowd having fun.

“All of the players coming to Ipswich are brilliant and it makes for an excellent and entertaining night of darts.”