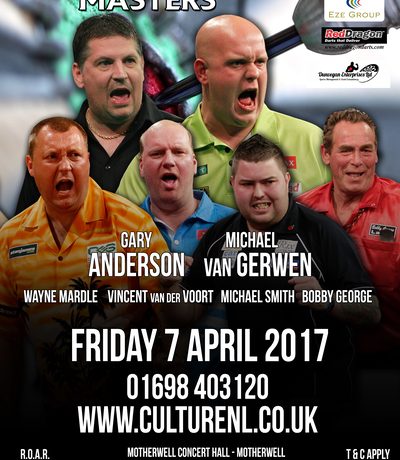 Gary Anderson will look to settle the score against Michael van Gerwen when the two darting giants have their Motherwell rematch in 2017.

World number one van Gerwen won their first showdown in front of a capacity crowd at Motherwell Concert Hall, Civic Centre in 2016.

It was a thrilling contest of the highest standard which was settled by a last-leg shoot-out.

And Scotland’s two-times and back-to-back World Champion is expecting more of the same when darts’ premier pair clash again on April 7.

“It was such a fantastic night last time,” said Anderson, who lost out to Van Gerwen in January’s World Championship final.

“The crowd were immense. Absolutely incredible. They gave me an awesome reception but also gave Michael the respect he deserves too.

“That enabled us to perform near our best and it’s no surprise it went all the way… but I’ll get him this time!”

Ahead of the headline clash between the best two players on the planet, Dutch ace Vincent van Voort and Premier League star Michael Smith will also do battle, while arguably the two biggest entertainers in darts Bobby George and Wayne Mardle will be also be appearing.

Tickets for the William Hill Motherwell Masters are available now via the following outlets.